Who are the bad guys, again… 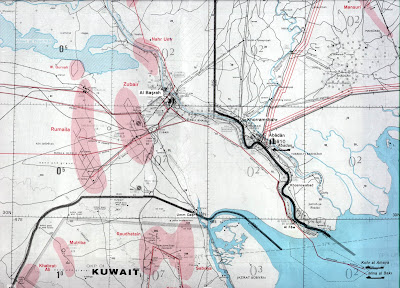 The United States and other nations routinely conduct FON events (freedom of navigation) to underscore the fact that these boundaries are unrecognized claims. This is not the case for the captured British sailors. To me the case is fairly clear that the British VBSS (vessel board search and seizure) team was tricked. The British MOD indicates that the reported position of the target vessel was well within Iraqi territorial waters and the arrival of Iranian naval assets was a surprise (indicating a planned event) to the UK forces.

The sailors are now in Tehran, separated to prevent any possible rescue. The Iranians will not harm them, unless they would like some serious hurt landing on their heads from US and UK forces. They are simply putting their thumb in the eye of the West reminding us that our precious rules and laws make us beholden to their outrageous behavior. 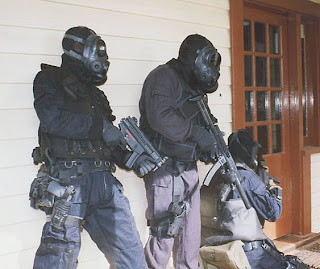 The Iranians really don't like the British. They have had terrible relations with them since the start of the 20th century. In a great summary of UK / Iranian relations, All The Shah's Men provides a superior account of why the Iranians and the Brits are at such loggerheads.

Compounding this issue is the idea of borders and ownership of the Arabian / Persian Gulf and the Shaat-al-Arab. There is no doubt that the UK soldiers most likely crossed over the "line" in the SAA and were grabbed by Iranian naval units. The actual sovereignty of this stretch of muddy water has been in dispute for decades. The Iranians have even placed a flag and heavy machine gun on a sunken crane near the Iraqi oil terminal KAAOT in the Shaat-al-Arab. They use this as a platform to exert their national boundaries and threaten Iraqi and coalition naval assets.

Not a nice group. Routinely they will run out from the shore in their Boghammer attack boats and "dare" forces to engage.

The fifteen British sailors and marines do not deserve to be interrogated. They should be released in accordance with international agreements.

If not, the Brits should act. 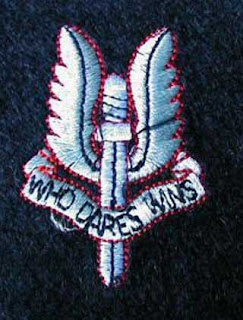 There I said it. From their devil may care attitude to their vigorous, albeit futile, defense of their culture. The French know some things the rest of the world could stand to learn.

I worked for some years for a French company. I know a number of fine French citizens. I like french fries.

One of the most remarkable things the French have done is that they have opened their UFO files to the world.

This is amazing!
The fact that a nation of serious scientific and defense capability (the French have nukes, quite a few, in fact) would reveal this to EVERYONE should be a lesson for other nations - how about us? I am not sure if there are some redactions for masking sensor capabilities or other national secrets, but the cases and evidence themselves for these events should be public.

Simply put, the more we can examine these phenomenon, the more likely we are to understand them. Perhaps they are all a series of "non-events", perhaps not.

Unlike crop circles, widely proven to be hoaxes, sightings of unidentified flying objects are as yet still in the realm of the possible for all sorts of explanations.

Skeptic magazine is running a tribute to one of the greatest popularizers of science and wonder of the 20th century. He is, of course, Carl Sagan. I became a Saganite in high school. When the first airing of his COSMOS series appeared on PBS, I forced the school play rehearsals for Sweeney Todd to be adjusted in order that I could see the series.
Sagan provided the necessary wonder and layman's language for the immense possibilities, discoveries and limitations of science. He gently addressed myth and its place in the human psyche and fought against "pseudoscience" and promoted a political viewpoint of humanity as a custodian of the planet (very anti-war / disarmament / etc.).
Cosmic Connie, one of my favorite writers, posted a great essay on the continual struggle between skepticism and the "unknown". I must confess to being in a similar quandry.
I want to believe in aliens, ghosts, magnetic fields, the Bermuda triangle and other amazing possibilities. I have had some strange personal experiences (seeing a "ghostly figure" on the USS LEXINGTON, recording some EVP in Charleston, etc.). However, until we can measure these things in a meaningful way, they are simply that, possibilities. What is disheartening is that there are a LOT of people who profess to "know" the answers and a lot of folks who simply believe them
I think this is an age old struggle and is unlikely to end anytime soon. For each time we unveil a new level of knowledge, there is still the next horizon to be imagined and unlocked. This is, actually, a good thing. It forces us to think of the possible while proving the probable.
at March 16, 2007 11 comments:

It is amazing the plethora of self help gurus who peddle their wares throughout the planet. Most famously, of late, is the Australian Rhonda Byrne who developed The Secret. Many of these people have taken the karmic philosophy and spiked it for Western consumption. The West, having been failed by a largely corrupt church and the rise of rationalism, has sought desperately to reconnect with it spiritual side.

It is sad that so many folks simply refuse to accept that acts of kindness, personal responsibility and individual humility are more than adequate pathways to personal spirituality. I have been on my own quest of late. It's not been pleasant, either.
And yet, there comes a moment when a crystallizing vision arises to focus all your thoughts, hopes and fears.
And it is this.
You are responsible for your own actions.
You will bear the consequences of those actions.
There is a definable, demonstrable good and evil in the world.
So let it be.
at March 14, 2007 7 comments:

I've said it before, this guy is hilarious! Check out the home page for all the episodes. I don't know much about the origins of this, but the sheer precision guided humor is perfect.

We are all Spartans...

The newest blood and glory movie ( a remake) is coming to town. It is the 300 and is a stylized version of the battle of Thermopalye. The Spartans stood against a horde of Persians under Xerxes. The Spartans were led by Leonidas Leonidas, and a core group of 300 soldiers (and several thousand allies). Leonidas was told he was doomed and indeed fell in battle. The Persians were defeated and Sparta was saved.
A recent posting on Drudge Report has reporters making analogies between Bush and the two leaders in the movies. Considering this is an ancient story and a remake at that. The question seems secondary.
However, I do have an opinion. Bush is Leonidas and we are Sparta. I really don't know who Xerxes is in the modern context, perhaps simply a representation of the backward nature of some of our opponents.
Let me offer a few comparisons;
1) Bush (although not falling in battle) , will suffer a similar political fate for a time. That is until history returns to judge our actions.
2) The Spartans sent an all volunteer force to deal with an unpopular, but critical, conflict.
3) Leonidas is played by Gerard Butler (initials G.B.) - okay, that's a stretch.
I strongly believe that this conflict will define the course of the world for the next century. I think it will be made moot by creeping technology. For example, Honda is launching a hydrogen car in 2008 in California. America has arisen, not with a bloody vengance, but with an eye to its security through energy and independence.
Once again the flailings of the trailing edge of the planet will be disregarded. Hopefully, these societies will embrace true equality and reexamine some of their extreme social practices. Until then, count me among the 300.
at March 04, 2007 11 comments: