I signed up for the DoD news ticker some time ago. Every day I am
bombarded with a variety of stories from the ridiculous (DoD supports
Western California Red Tailed Hawk Habitat) to the grim. Most of the
messages I gloss over and move on. The net has replaced the newspaper
and broadcast media as my primary and usually single source for
information.

Every day I stop, however, and carefully read the casualty reports.
These are only the notices which have resulted in fatalities. Spc.
Ashley, a young man from Kansas lost his life in service to his nation
on May 24th. He was doing what he was trained to do, doing what he
volunteered to do and doing it for nations, which at times, have no idea
of the measure of sacrifice exhibited by these young men and women.

Citizen Primus, my oldest, saw the headlines in the worst paper in the
world (WPITW), the Atlanta Journal Constitution.
The front page read "100 Fallen Georgia Soldiers". With a note of
surprise in his voice, he asked me what that meant. I explained to him
that we are at war and that people die in war. He is a very smart guy,
he knows that his great-grandfather served in WWII, he knows that his
father served in the Korean War and yet when he and I talk about the
current conflict - it's difficult to translate.

I do not want him to become obsessed or fearful of what is transpiring.
I do want him to understand that there is a good and evil in the world.
A set of choices we all make which can be described as right and wrong,
including the choices which skew more into the grey area. Choices of
conscience and choices of action.

Spc. Ashley made a choice. What all of his reasons behind that choice
were are unknown to me, but I think I understand some of them. I think
he served in the hopes that someday a generation will not be burdened
with that same choice.

Make your Memorial Day a true time of reflection and remembrance.

NEWS RELEASES from the United States Department of Defense

The Department of Defense announced today the death of a soldier who was
supporting Operation Iraqi Freedom.

For more information in regard to this release the media can contact the
Fort Riley public affairs office at (785) 239-3410.

On the road again...

I get a chance to travel, which is the best therapy for ignorance. Few events allow one to adapt their viewpoint like first hand experience. At present I am at gate 19 in Reagan National Airport. I spent a good weekend in our nation's capital.

At my conference with the Navy I heard about the challenges facing us as a Navy and, more importantly, as a country. I was delighted to reconnect with so many friends, including some not in the Navy.

Do you listen to popular music? And by that I mean the tunes favored by the 16-25 year old demographic. I am blessed (cursed) to have XM satellite radio. I find it a welcome relief to the narrow wasteland that is commercial, broadcast radio - although XM is slipping into some of the same bad habits.

Many of the songs are simple, typical teen angst love notes. Penned by inexperienced souls who long to find something meaningful in their too short lives. Some of the lyrics are downright disturbing and contrary to what I would consider rational morality.

Let me tank Pink's recent chart topper - which I find entertaining and a good listen - but also confusing. In the song just U and ur Hand she waxes poetic about how she just wants to dance at the club and not be bothered by the constantly circling male predators.

Fair enough. Jimmy Buffet wrote his Fins song about much the same thing. However, Pink drops the interesting line "...keep your drink, just gimme the money..."
Huh.
So don't bug me while I dance and drink myself stupid, but give me your money.
Am I missing something?
Just a ponderable.Where is this going? Part of our present political miasma is related to the extreme disconnect between "traditional" thinking and the way the world is presently operating. As citizens of ther United States, most of us have NOT been impacted by the war in any meaningful way.
Save the military personnel and their families, there has been ZERO effect on the nation. The economy is robust and things are pretty much status quo. There is something disturbing when the citizens of the west need bear no burden for the fate of the planet.

James Lileks is an engaging and entertaining writer. For those who don’t know his work, he has a great web site with a collection of his work at his site. He has published a couple of books is I favor him for his perspective on mid 20th century culture.

Apparently he also has a job writing for a newspaper in Minnesota.

Like most internet preferring readers, sometimes I don’t get the full story on the authors of what I read. Which is a bit tricky as I might actually find myself agreeing with someone like EJ Dionne, when I know in my heart that they (he? she? I’m not even sure of the gender of Mr/Ms. Dionne!) are actually a reincarnation of Karl Marx’s lost cousin Skid.

However, Lileks is a real, honest to goodness newspaper man!

Just like my uncle Bob. Now, my uncle Bob is also a real newspaperman – definitely a man. He lived in the glorious town of Indian Rocks Beach, Florida and worked for the Clearwater Sun. He was an avid opponent of Scientology (tune in later for my rant on quack religions, dangerous beliefs and the incredible gullibility of humanity) and still writes a column, a lot apparently!.

He moved from the finest state in the Union to the cold reaches inhabited by on the intrepid, like Boston Maggie, definitely a woman.

Uncle Bob was caught up in the consolidation of print media in the 1980s.

He was one of the guys who made a very positive impact on my life – I even think he’s a democrat.

But I digress. Back to Lileks.

He has a great column on the impact of the change in his job. One of the worst appears to be no more telecommuting. Not good. I enjoyed hearing about his adventures with his daughter and, personally, I would rather field questions from my boys face to face and deal with the corporate world from the safety of my own domain.

If you don’t read his work, peruse his site. If you do, then keep it up and go read some of my Uncle Bob’s stuff!

Criminy, you don’t want to fill your hours reading the same old thing, do you? 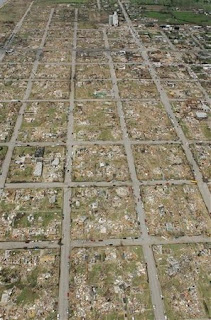 Greensburg, Kansas was devastated by a tornado which essentially annihilated the town. The storm was so powerful, that no public services remain. The entire main business district in this town of fifteen hundred was leveled. The governor of Kansas has made some irresponsible statements regarding the ability of her state to respond based upon National Guard deployment schedules. I can not comment on her statement, my instinct tells me it’s worthless, much as Sen. Dick Durbin’s comments about what he knew and when about the debate over the invasion of Iraq.

To the point, Greensburg suffered a terrible tragedy. Miraculously, only 10 people lost their lives in what was billed as a F5 tornado with 205 mph winds. There was some clear preparedness by the people of the town and sufficient warning to save almost everyone.

My question is now what?

Should we rebuild Greensburg?

Does the government, state, local or otherwise, have an obligation to rebuild a city so utterly destroyed? During the great Mississippi floods of the mid 1990s, whole towns were decimated. Despite the singular nature of the flood, some towns were not rebuilt. Some towns were relocated. 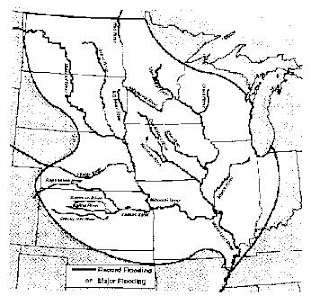 Katrina impacted the Gulf Coast to such an extent that many municipalities are thinking twice about rebuilding.

The town should be commended to preventing a massive loss of life. Regrettably, the only task remaining for Greensburg is to remove the debris, shelter the homeless and decide on how and whether to rebuild.

A trip to Army Girl: Serendipity...

Army Girl: Serendipity: A neat little slice of a junior enlightened enlisted's view from the box. I like to dop by here periodically.
at May 04, 2007 6 comments:

Okay, so that is not true. Yet. It seems that the senator from California may be complicit in illegally funneling $1.5bn in MILCON funds to companies controlled by her husband. If you think this is bad, let's see how the newly minted democratic congress handles this issue.

I am not a fan of congress. Any governing by committee or representation will fall into a sectarian nest of vitriolic self-interest with no interest in the whole, except as it serves to provide for their benefit.
But, it's worked for us so far. The problem is that we are now able to see every indiscretion and every backroom deal that takes place.
Does it matter?
Can we handle the truth?
Do we want to?
I, for one, do. I expect accountability. I expect good behavior. I require good stewardship on behalf of the WHOLE country.
Feinstein should be held to the same standard.
As should ALL our elected and appointed officials.
at May 01, 2007 19 comments:

Hello folks!  Quick question - the return of Day by Day and the Deux News - interesting or not?  Value added or not?  Remember this is all about my own ego, I mean my beloved readers.
PS - Take a look at my del.ico.com on the sidebar.  A great article from The Prospect on why the Middle East doesn't matter and a rant from Kaplan on the inappropriateness of Congress legislating foreign policy.
PPS - I am preparing to send one of my best sailors over to the sandbox.  She is a heavy duty civic works manager in her civilian life and a single mom.  She is perhaps the one of the finest people I have met (myself included).  She has been recalled once before and is now off to perform again for the nation.
at May 01, 2007 16 comments: